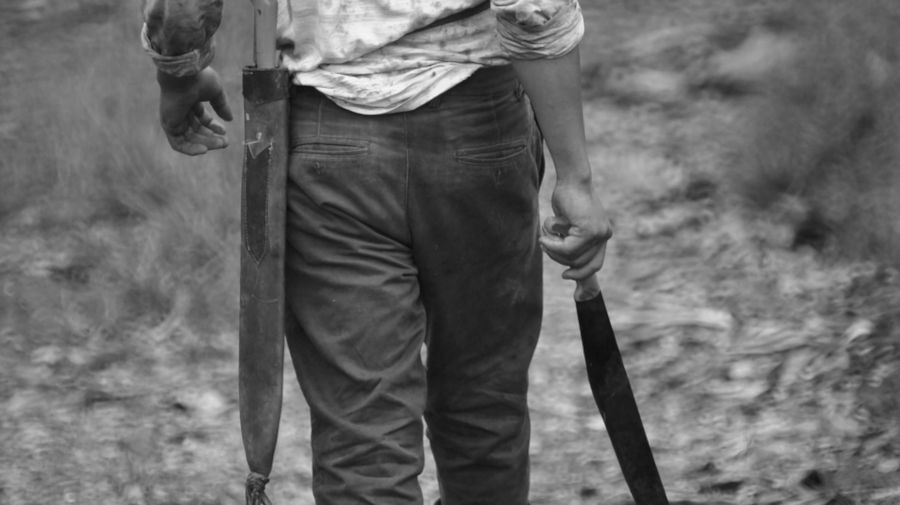 Machetes are the most useful, straightforward tools that you can afford. I constantly use them when camping in the woods, traveling the country, and working in the back-yard or garden. But the first thing I researched is when is carrying a machete legal, and how to avoid trouble, confiscation, and fines. Here is what I found.

Can you carry a machete? Yes, you can, but there are many caveats: local jurisdiction either totally forbids on-person machete carrying, or it allows it under certain conditions. The UK is most restrictive, but in California (for example) you can carry a sheathed machete in public as long as you don’t try to conceal or draw the sword. In certain rural, less developed regions like South East Asia carrying a machete is the norm!

Here are some of the craziest stories and rules that I found while doing my research. If these taught me anything, it was to consult the local legislation and not trust intuition when it comes to legal quirks about weapons.

When and Where Can You Carry a Machete in Public?

I am going to start with the least restrictive jurisdictions, and in the Western world, the US is most accepting of weapon carry and transportation.

Texas has recently passed a bill which allows responsible adults to openly carry blades longer than 5.5 inches (this includes samurai swords, machetes, spears – anything medieval). Of course, the law does limit this open-arms embrace of weapon carrying, and it forbids it in schools, prisons, campuses parks, and worship locations.

I do like this open approach because it is realistic; People who are geared with criminal intent will find a way to commit the crime, regardless of how available the means are.

California is another US state with liberal leanings it comes to carrying a bladed weapon in public space. Just make sure it is sheathed. You can openly carry a sheathed sword, and in fact, the law requires it! Any attempt to conceal the weapon is a misdemeanor, so don’t try to hide it! Cane swords fall under this category.

New York did have some gang violence in the past, so their Laconian bladed-weapon restriction doesn’t strike me as unjustifiable. Just read this quote I pull up from the New York Post:

“In the city, machetes — agricultural tools used to clear brush or crack open a coconut — are wielded by lunatics, crooks, and gangbangers such as the Mara Salvatrucha, or MS-13, to intimidate rivals.”

The UK is much more restrictive about swords. It used to legal to buy, sell, and own them, but after a wave of sword-related violence, the UK legislation has tightened drastically. It is now illegal to even purchase or import curved swords that exceed 50cm in length (that includes machetes).

In certain circumstances, you can justify purchasing and owning a machete if you are a collector, construction worker, or farmer. But you can certainly not justify carrying one in public, be it sheathed or unsheathed. UK laws are so weird sometimes, I read it’s now allowed to aggressively defend your home against an intruder, by use of force.

While I won’t go through a super-comprehensive list of all countries and states, I have just provided a small sample for you to taste and get a basic understanding of how and why bladed-weapon jurisdiction can surprise you.

Disclaimer: I am not a lawyer, just a law-abiding citizen, concerned with following the rules of the land on which I am standing. Do not take this article as establish authority, instead consult your local jurisdiction and make sure you follow it!

Can I Carry a Machete in my Car?

I used to transport a machete in my trunk. But where I am from, the police don’t usually make random stops and demand that you show the contents of the car trunk. In any case, my machete was properly sheathed and store in the original boxing, so that even if they saw the blades, it would be clear that I wasn’t intending to use it in a fight.

In the US, carrying a machete in your car largely depends on the state jurisdiction and blade length. Texas and California have loosened their bladed weapons legislation, but that’s not the case in other states. Generally speaking, the cops tend to be understanding if you come straight forward when they ask you about it.

And one more thing, if you have a machete, sword or any kind of long knife in your car, store it safely in the trunk, not the glove compartment. Don’t bring medieval weapons rack or an arsenal, because you will be hard-pressed to justify it.

Additionally, you can get a concealed weapons permit, just to stay on the safe side.

Are Sword Canes Legal to Walk with?

Sword canes are concealed bladed weapons, and therefore their legality status is highly nuanced. As with machetes, they fall under municipal jurisdiction, not federal, so there are legal in certain states.

If you break the law, it is considered a misdemeanor. Most states made it illegal to carry a sword cane in public, and some even went as far as making ownership forbidden.

It is such a shame! Sword canes are excellent swords for self-defense in certain situations, precisely because they are concealed. But that is not always the case.

Concealment is what makes them so dangerous in the hands of criminals. Most offenders attack their victims while unprepared, so most likely they won’t even draw the blade.

And in the US, guns are legal, the thieves and muggers might be armed, so having a sword is a sure way to get shot.

What is the Legal Knife Size to Carry?

In the UK, the only type of knife you can carry in public is a folding blade that is under 3 inches (less than 7.62 cm), if you are an adult over 18. Underaged individuals are forbidden to carry any kind of blade, and store owners cannot sell them any.

The UK, and London especially, is facing an aggressive wave of knife crime, so it is understandable that they needed to up their game. For an authority governmental article about which kind of knife you can and cannot bring, sell, buy in the UK, check this link to their page.

The US tends to be more forgiving about blade length. I remember reading that the legal knife length to carry is 5.5 inches and under. But I don’t whether that applies to all states.

To my wider, global audience, be assured that I haven’t forgotten about you! Here is a comprehensive Wikipedia post about knife legislation in the most traveled countries around the globe. Hope it helps, and travel safe!

How to Carry and Transport a Machete by Plane?

Machetes are classified as agricultural tools, so you can buy them and bring them back to the US. Just make sure you properly sheath, box, and secure them in your luggage. Of course, you can’t legally bring them into the UK because they have strict legislation against sword ownership.

Depending on where you buy the machete, it may not be legal to bring it on the plane, so contact the airport assistance and ask them about the local legislation for bladed weapons.

It is legal to send it through the mail, but to avoid shipping delays and inspections, make sure the package is classified under tools, not under weapons collections.

Can I bring a machete into the US? The TSA (Transport Security Administration) clearly states that you cannot bring a machete aboard a plane in your hand-luggage. You need to sheath, safely package, and store it in your luggage. And don’t forget to report your luggage contents. They have an app that can help with further questions about customs.

Can I carry a machete in Canada? My understanding is that machete fall under tools category and not prohibited weapons, according to Canadian law. But when it is used with intent to hurt or kill, them it legally becomes a weapon. You need to read more about it!

It is legal to carry a machete under 18? It is definitely not! Openly carrying a sword of any kinds tends to convey criminal intent, and it is prohibited in many places. If you live in a rural area in Latin America or Asia, or someplace where machetes are practical tools of daily life, then the police most likely won’t give you a hard time.

Three Reasons Why a Sword Is a Good Home Defense Weapon