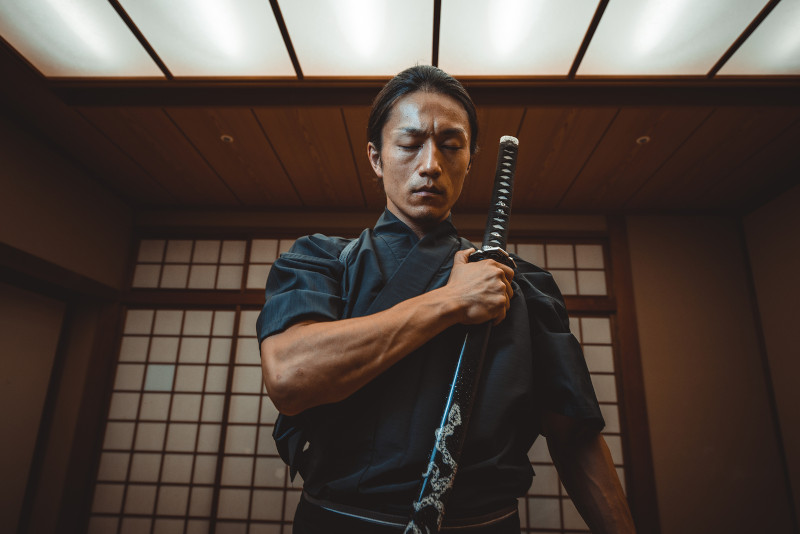 The curved single-edged blade gave off a sparkling lustrous reflection as the light from the windows fell on its surface. My eyes roamed with amazement and sacred stillness across the blade’s entire length, down to its long grip, as my hands tingled with jealousy knowing I wasn’t allowed to touch it.

The guide had earlier talked about how the katana could slice through multiple decks of bamboo mats with accurate merciless precision. The blade was so strong and was said to be devised from the most skillful engineering involving a lot of masterminds and men of expertise.

As I stared at the sword through the delicate glass in the museum, I yearned to learn more about the origin and history of these incredible men who had spent greater parts of their lives designing this mystical art piece.

Back home, I did thorough research on famous Japanese sword makers and was filled with so much historical knowledge I couldn’t keep it all to myself.

Katanas have such a thrilling background, you could go on writing tons of articles about their history. Through my research, I’ve been able to give a brief overview of famous Japanese sword makers and their rather fascinating milieu.

This article will take you back to the samurai golden age and implode your minds so much that you will desire a sword of your own.

Why Japanese Sword Makers So Unreal?

The Samurai warriors of Japan dedicated their lives to the study of combat, and to their lords with the utmost loyalty. Their best tools were none other than the Japanese curved swords (Katana, as we call them). These blades were made through a lot of efforts and had religious significance.

There’s a degree of precision one must seek, especially when creating an item of such a high value, infused with spirituality and belief. These blades were of so much value that the Samurai families passed them from generation to generation. The sword was an extension of the Samurai warrior and legends say it contained the soul of the wielder.

Ancient famous Japanese sword makers were able to transform this mystery into something real, some even sleeplessly working for days until a sword was completed. This special dedication and attachment towards their piece made them one of the most skilled artists ever. They were not mere swordsmiths as they also had an alchemical knowledge of metal. Their skill and understanding came from several decades of practice with a master smith.

The Japanese swords pride in so much distinct quality and originality; And that has made them highly priced and widely admired. The level of care and technique that went into the creation of a samurai sword made the end-product not only a notable weapon of war but also a cherished work of art.

Are Modern Sword Makers As Good As Historical Legends?

The rise in technological advancements over the years has been a real game changer for Japanese sword makers. Famous historical swordsmiths had to work through technological impossibilities like the metallurgical challenges and precisely calculating the right amount of iron and charcoal needed to make the steel hard but not too brittle, as too much carbon could cause the blade to break. They had to make the best steel out of poor-quality iron ore, too little and impure.

Of course, a thousand years ago, the element carbon has not been discovered and the swordsmiths only knew about iron. They were unable to make precise measurements while smelting the ore material.

The entire process included melting the ore, pouring a mould, folding, hammering, differential hardening. Then they had to sharpen, polish, ornate the final product. It took months of hard work, and it could go wrong at any moment, a case in which they had to start from scratch.

Swords were tested in the most brute ways on criminals during execution. A sword that could cut through the midsection was favored, and the one that could go through more than one body was a prize.

Nowadays, we have better standards of quality and more humane ways of testing the ferocity of each katana. During production, the right amount of materials needed for a sword can be accurately calculated using the Charpy impact test.

I wrote a hands-on guide on picking the toughest and sharpest katana on the market. You won’t believe how good their steel quality is!

Going back to more traditional methods… Jewel-steel (tamahagane) was used for the blades in those ancient days, and it still is manufactured in some places in Japan – there are modern traditional sword makers, which still follow the traditional ways. Modern jewel-steel is more uniform in its iron and carbon mixture than the material used hundreds of years ago.

Nowadays, the temperature of the furnace can be easily controlled as opposed to the olden days, when diligent swordsmiths like Akira Kihara had to sacrifice sleepless nights to ensure the furnace was properly running till their steel was done.

The ancient famous Japanese sword makers really put in a lot of hard work and dedication into the process of creating their swords, but the quality is now better and improved due to technology input. And there is much less effort required in the process.

Who Are the Best Modern Sword Makers In Japan?

Becoming a modern-day swordsmith is a tough decision to make. Yes, in the long run, you can make tens of thousands of dollars from the sale of just one traditionally forged sword.

But the process requires a high level of strenuous training, years of apprenticeship, and an accreditation from the Japanese Ministry of Culture and History. It doesn’t come off as a surprise that of all the 300 active swordsmiths in Japan, only about 30 make it their sole source of living.

One of the top modern-day swordsmithing geniuses is the highly esteemed Yoshindo Yoshihara. He is a major contributor to the spread of traditional Japanese sword art. He authored several books and has his works are displayed in museums in the United States which have gained him major popularity. His craftsmanship attracts many onlookers:

Yoshindo has a strong sense of originality and goes the extra mile to forge swords following the traditional methods. His pieces are one of the finest ever made, costing more than $30,000 (if he is willing to accept the job).

Ages ago, to become a swordsmith required one to deny family benefits and heritage to follow one’s true passion, which was the case of Korehira Watanabe. He developed a passion as a child, and it grew into a strong overwhelming desire later in life, which led him to become a renowned swordsmith, outside of his family wishes.

In his interview, he states his personal drive, which is to pass along through his swords, the aesthetics, and soul of the Japanese arts.

This list of modern famous Japanese sword makers would lack completeness without mentioning a rare gem of brilliance like Ono Yoshimitsu. He is popularly known for the many prizes he has won. He is a typical star of the moment, considered too good to compete against. He is hell-bent towards perfection, making two blades at a time, and destroying the lesser one.

Gassan Sadatshi, president of the All Japan Swordsmith Association and heir to the famous Gassan School of Smiting is also considered one of the living national treasures in the industry.

Going back hundreds of years in Japanese history, I discovered one of the two most valuable and revered figures in the folklore of blacksmithing: Masamune and Muramasa. We all know the stories, I wrote about them on this blog.

They lived in the same historical period but were masters of such a great scale, that stories about their lives and blades developed a legendary aura.

Generally agreed to have worked in the late 13th century and early 14th century, Masamune created swords that were passed down ancient Samurai families and soared the world’s interest in Japanese art. His works possessed a striking superior beauty and were of indisputable quality, popular among the great Japanese warriors of the medieval period.

Muramasa lived between the 13th and 14th century (the Muromachi period). He was a famous Japanese sword maker who founded the Muramasa school. His style was rather unique and popular in pre-modern times.

He was very skilled at his work but was said to be an ill-balanced and disturbed man, predisposed to mental illness, which led to his swords being tagged as cursed and blood-thirsty. The swords were said to be blood-hungry and possessed by Muramasa’s troubling spirit. Although, his school has gained notable significance in popular culture.

Japanese sword smiting is something that I will always admire. These artists show not only profound dedication to their work but undeterred reverence for originality and uniqueness. The Japanese history is one of intense depth, and maybe just one day I’ll opt to visit such that legendary land. And possess my very own traditional katana. Hopefully not one of Muramasa’s cursed ones!

Best Samurai Sword Ever Made

Where To Buy a Real Katana?

Turkish Kilij vs Katana – Which Sword is Better?