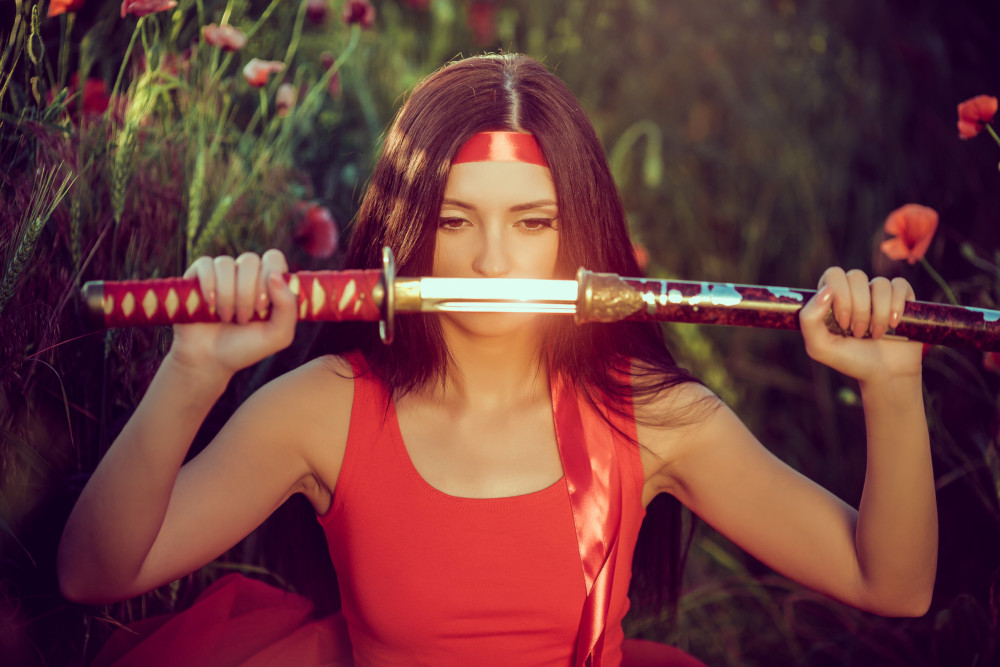 Katanas are known around the world for their unique appearance, laborious forging techniques, and artistic design. They are also famous for their near-legendary status and are counted among the sharpest and deadliest swords in the world. But really, how sharp is a samurai sword?

Does the katana measure up to the myths and legends portrayed in popular culture? Let’s find out how these ancient weapons, banned for ordinary citizens in some countries, live up to their impressive tales!

If you are in a hurry, check our sharpest modern-day katanas article. We went through a comprehensive list of market-grade katanas and ranked them in terms of strength, sharpness, and quality.

What Is a Samurai Sword?

Before we look at how sharp is a samurai sword, let’s get the basics straight. Japanese swords have been in production since the Kofun period (300–538 AD), but the modern Japanese swords, featuring the curved blade, were not made until several centuries later.

Several variations of the traditional Japanese sword were made, with the most popular being the katana, wakizashi, odachi, and tachi. Each is characterized by different lengths, shapes, and even forging methods. Additionally, these blades serve different purposes.

The term “katana” is used to describe the nihontō, a family of swords that are about 23.9 inches (60.6 cm) in length (modern versions are longer). The katana was historically used in feudal Japan as a primary weapon, often paired, in the daisho tradition, with a shorter wakizashi.

Katanas have a long two-handed hilt with either a circular or squared guard. Its curved, single-edged blade (often marked with the swordsmith’s signature) was carried at the hip, in a wooden sheath, with its edge facing upwards. Often these weapons were seen as a status symbol, as well as a tool for warfare.

Designed for close combat and duels, katanas can slice from a quick draw, allowing the samurai to strike in a single motion while unsheathing the sword. Here is a video of a well-trained modern samurai cutting a pistol bullet mid-air:

Highly-skilled swordsmen would test their katana blade’s sharpness and durability. As with any weapon, the katana is only as effective as the person wielding it, so having a master smith test your weapon seems practical.

The katana is often portrayed in movies as a weapon having an immense cutting ability. Let’s see if the legends hold true. How sharp is a samurai sword?

Is It Sharper Than Other Swords?

The katana is regarded as one of the finest cutting weapons ever made, but is it sharper than other swords? Technically, you can grind a sword’s edge to be as thin as a single molecular layer (of its material). Of course, that would be useless – it would dull instantly because any cut would chip or dent the edge.

High carbon steel is hard enough and it can be sharpened down to the thickness of a single steel molecule. Katanas are made by layering steel sheets of different carbon concentrations, which evens out the carbon content, removes impurities and oxygen, resulting in a super-hard blade.

The Japanese used folded-steel for their blades, but modern technology offers many better alternatives. Damascus steel is also regarded as an excellent material for forging hard and sharp weapons. A lot less is known about the ancient techniques of Middle-Eastern swordsmiths, but the current record holder for world’s sharpest blade was made from Wootz Damascus steel.

Compared to European weapons, the katana is much sharper. Yet, sharper does not always mean better. Curvature, hardness, and sharpness are what make the katana a formidable weapon.

Against the scale & leather armor traditionally worn by Japanese fighters, it was a very effective weapon. Versus the heavy plate armor typically worn by European warriors, a larger, heavier blade would have been more useful. Even so, a samurai sword can easily pierce through a metal sheet, without a problem.

How sharp should a katana be? Sharp enough to perform clean cuts, but not over-the-top because the paper-thin edge will dull unevenly and quickly. Having a sharp blade is great to show off the bladesmith’s skill, but it will dull quickly and it can even chip or break on impact.

There is a fine line between being capable to slice through paper and totally useless in real combat.

What Can a Samurai Sword Cut Through?

Popular culture and movies have depicted samurai swords as being able to cut through just about anything, from fruit to machine gun barrels.

While a katana is strong and sharp enough to cut through soft metallic objects, it might bend or break when striking a sturdy target (difficult cuts require a decent amount of skill). Better stick to slicing pineapples and plastic bottles, until you level-up!

As mentioned earlier, katanas are often tested for sharpness by cutting through paper or by thinly slicing wood. Traditionally, they were measured up against wet reeds, designed to mimic the density of a human limb. Before the reeds method became mainstream, the swords were tested on deceased criminals!

Gruesome as this may seem, public executions in feudal Japan were often carried out by trained professionals using swords. Testing their blades on live human beings was the ultimate show of ability. A good blade could slice a torso in half, but an exceptional one could cut through multiples human torsos. Of course, skill is essential for this feat!

Wet reeds, as well as flesh and bone, are much stronger compared to paper, and a katana can easily cut through. However, technique, force, geometry, timing, and precision are just as important as the tool.

You can see how effective the blade is in the hands of a master, against large chunks of flesh. Off course, that requires skill and a lot of practice.

A novice could easily break a blade if they clumsily swing it against a strong target. Some records say that only a highly-trained master was allowed to test the blades because it was dangerous, and it could result in a damaged sword, with months of hard work down the drain.

Are the Legends True?

We all know that legends usually exaggerate the truth, so which of the following facts are true about the katana. It is an iconic piece of art that has generated many interesting and curious stories.

Can a Samurai Sword Cut Through a Silk Scarf Dropped On the Blade?

Without the use of force, a katana cannot slice; You need to pull or draw the blade, allowing the razor-sharp edge to open a cut. If the material slides across the immobile edge, it can be sliced open, depending on its weight. Heavier object experience more friction with the edge! But a minimum amount of friction must be present.

This is exactly how the trick of walking on swords is accomplished, without cutting oneself. The performer learns to walk in a manner that minimizes friction. But a silk scarf is too light to bear any friction against the edge to be cut in half simply by falling on the sword!

As you can see, the sword cannot slice even through a piece of paper with a can of aluminum attached to it. You need that extra bit of weight to pull it down. But once paper starts falling through it doesn’t stop and inertia will do the rest.

Can a Katana Cut Another Sword in Half?

If struck correctly, it’s definitely possible to break any sword, but cleanly cutting one in half with a katana is very unlikely. The proper way to use a katana is for slicing and slashing, not cutting, and definitely not chopping. That being said, a good samurai sword is sharp enough to cut a copper pipe in half.

Samurai sword fights were swift and deadly. They lasted no longer than 3 or 4 quick swipes. So, naturally, the blade was designed for easy maneuvering and slashing, not for intercepting another sword. That is the biggest weakness of the katana: It is elegant, slender and swift, but not as durable.

The European broadswords, machetes, long-swords, scimitars have a broader blade and are made of softer steel, which is more durable. So they could win against a katana if the two were to be struck together at high speed.

Were some Japanese Swords Thrown Into the Ocean After WW2?

Yes, the Allies destroyed many nihonto swords (seized from the defeated Japanese soldiers) when the war ended. Some of the blades were thrown into the sea. Before WW2 began, Imperial Japan tried to revive the Samurai tradition.

The soldiers were indoctrinated with the same mentality of discipline, obedience, and blind loyalty as the samurai. Some believed that carrying a katana in battle would connect them to the spirits of their noble ancestors. It is true this encouraged and strengthened their morale.

The Americans disarmed the captives and disposed of their precious swords. Eventually, the US Navy command was convinced by two Japanese ambassadors that the katana is a cultural heritage, not a weapon.

With the help of Americans, they founded the NBTHK (Nihon Bijutsu Token Hozon Kyokai), the Society for the Preservation of the Japan Art Sword, in 1948.

Will Fingerprints Ruin a Blade?

Yes, fingerprints contain organic oils that will promote oxidation and rust even on the very fine blades. Proper maintenance is essential to keeping a katana in excellent condition.

Samurai swords do rust since they are not made of stainless steel, which is perfect for kitchenware, tools, and parts that come in contact with water. But stainless steel is a very poor option for a sword. So, yes, katanas do rust and need to be taken care of, once in a while. A good wipe and oiling, now and then, will do the trick!

Is It Illegal For Ordinary Japanese Citizens To Own a Katana?

No, but it is illegal to ostentatiously walk down the street holding it as if you were to attack someone. You may not carry or wield it in public spaces. When you transport it, it must be sheathed and stored away in a bag, backpack, or some kind of shoulder-carry. That also applies when you bring it to the dojo for training purposes.

Those are the legal limitations in most places. But depending on where you live, you should check the legal status of swords and long-bladed tools. Where I am from, everything with a sharp blade longer than 15 cm is categorized as “white arm” and cannot be legally concealed and carried in public. White arms are bladed weapons, as opposed to firearms.

In Japan, katanas must be Japanese-made and registered with the Japanese Sword Association (NBTHK). The sword must exhibit historical or cultural significance and have a certificate of authenticity, and the owner needs a special permit as well.

The Katana is Still Impressive

How sharp is a samurai sword? Well, it definitely has the sharpest blade on average, but not nearly close to the fantastic stories surrounding it. While some of the katana’s legendary attributes have been boosted by popular culture, it still lives up to my expectations in terms of sharpness, precision, and beauty.

The incredible abilities of the samurai and their legendary weapons have long fascinated historians and weapon-enthusiasts world-wide. The katana will stay the quintessential sword of choice for anyone willing to test its formidably sharp edge!