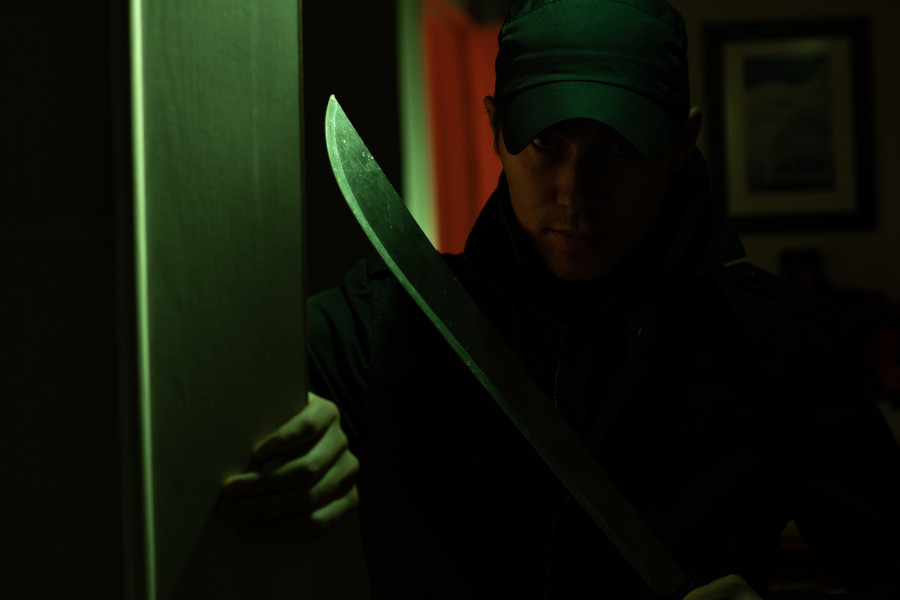 The sight of a razor-sharp sword is intimidating, and a battle-ready katana or a sturdy machete can easily come in handy in dangerous situations. But are they effective weapons for defending your home against unwanted company in the den of the night? I decided to do a little digging.

Is a sword a good home defense weapon? Short answer: it is good enough, but it is definitely not the best defense against home invaders! Certain types of swords are better, depending on where you live, how narrow the space is, and how much skill you have.

Many people who are concerned with home security turn to swords as weapons for self-defense, but they mistakenly believe that bigger, sharper swords are better. That is not always the case, and this article explains why…

What Are the Pros & Cons of Home-Defense Swords?

As with everything in life, swords bring some advantages and disadvantages to the table. There was a time when a sword was the most expensive, high-tier weapon you could buy – but as technology evolved, the times have changed.

Here is a list of things that make swords effective at defending your home, and later we will go through the cons.

They are second best only to guns. Most countries have a strict no-gun policy, even though you can apply for a permit. Having no gun is no excuse for having no defense, so a sword is the second-best weapon. You can’t use a bow or a spear, but a sword does have the necessary reach and it is lighter than a bat!

I would still consider a taser and some pepper spray, but what if these options don’t work? A carefully-chosen blade in the hands of a well-trained individual is truly a challenge for any invader.

Effective at disabling your attacker. I don’t encourage you to get a katana for home-defense before you learn how to use it. Swords are deadly, and you should be very serious and responsible because they are not meant for incompetent hands. Japanese swords are longer and lighter, so if you are a skilled user, you can learn to use them without causing unnecessary loss of life.

Before you decide on the best home-security strategy, consult the local legislation so that you don’t break the law by harmfully using illegal items.

Easy to buy and many options. While you need a special permit for firearms (in most countries), swords and long-knives are considered bladed weapons. That means you can legally own them, as long as you don’t carry them in a way that conveys an intention to harm (in the car trunk, or on the street). This applies to most countries (except the UK, where sword ownership is illegal).

I will explain later why not all blades are equally effective at defending your home. Certain kinds work better, based on how narrow the space is, and how much clutter there is.

Given what we already know, let’s run through a list of cons of why swords aren’t ideal home defense weapons:

Poor against firearms. My country has strict rules against firearms, and I am not planning on breaking them. But a criminal might! So, when I am awakened by a frightening sound in the middle of the night, I won’t know for sure how well armed the invader is. Bringing a sword might just startle him enough to shoot me! Unless he is a petty thief who just thought nobody would be home, in which case a sharp katana would surely frighten him away!

But as a general rule, don’t bring a sword to a gun fight. Don’t be like this guy!

Needs prerequisite training. If you are the type of person who loses self-control in the face of danger, then a sword might actually be your undoing. Not only will you be ineffectual in combat, but you might hurt yourself or even lose the blade. Imagine being completely unprepared and armed with a longsword in a very tiny, crowded corridor with piles of junk all around!

Before engaging in any kind of sword-fighting with a real weapon for acting stunts or real-life self-defense, learn some skill, become good at it! Become comfortable holding a sword. When shit hits the fan, your skill level will naturally decrease because of anxiety and less self-control!

For example, let’s assume your sword skill is 10 when you’re practicing at your best. When pressure is one, in a life or death situation, you would be an 8 or a 7!

It can take some time to become a decent sword-fighter. But even if your home never gets breached, at least you can proudly look at yourself in the mirror and feel competent and confident about mastering a new skill!

Is a Machete Good for Home Defense?

Yes, a machete is a common, useful, defensive weapon not only out in the wild but also for private property and indoors. They are the cheapest and most cost-effective blades that you can find.

In jurisdictions where gun ownership is illegal or heavily restricted, a machete is a decent option. Since guns are difficult to obtain in these jurisdictions, it is likely that perpetrators will be unarmed.

Machetes are lighter and easier to handle than axes, baseball bats, or crowbars. They are longer and more intimidating than knives. When a home intruder spots you armed with a machete, I don’t think he will risk rushing towards you, to disarm or claim the blade. Most likely he will run away, in the opposite direction!

Machetes are called bush-swords for a reason; They are best suited for outdoor work, camping, and path clearing. Even a good machete is a poor defensive weapon against an armed opponent (too short, and not designed for stabbing). They need to be sharpened to perform deep cuts, but even a dull machete can cripple an intruder. You don’t want to kill them, just prevent them from killing you!

So overall, not the worst choice considering the low cost and high accessibility.

Which is the Best Type of Machete for Defense?

The best and safest way to use machetes for self-defense is not chopping or cutting. It is far more effective to stab from a safe distance!

For that reason, some machetes types are better than others. Check out my article on how to pick a suitable machete based on personal needs. I explained why kukris and barongs are the best combat machetes.

The Roman gladius combines all the advantages of a machete, and it features a sharp tip, ideal for stabbing.

Is it Legal to Use a Sword for Home-Defense?

In most jurisdictions, it is! Legally, if an intruder is present in your house, especially in the middle of the night, it is considered home invasion and the law justifies homicide for protecting your life against criminal and murderous intent:

“The American justice system recognizes the right of someone to protect himself or herself from harm. In order for self-defense to apply, the defendant must have believed that he or she was in imminent danger of harm and that the use and degree of force that he or she used was reasonably necessary to protect his or her safety or that of a third person. “

Of course, depending on where you live, in which state or country, the local jurisdiction may differ substantially. Always consult the law and obey it!

Be aware that you may apply the same standards of judgment when an intruder is outside, on your porch or surrounding property.

Freaky Real-Life Stories of People Defending Their Homes with Swords

Most people would disagree with me about home-defense with swords. They argue about the innumerable shortcomings and disadvantages of using swords against burglars.

I tried to provide a nuanced opinion, with pros and cons, but don’t trust me! Let’s look at the news; Real-life examples speak louder than words.

Is a sword a good home defense weapon? Here are some gory, gruesome real-life stories that might turn your stomach around. Consider yourself warned and don’t dare click the links unless you are a hardened badass:

1. Man defends family with a katana, against two home invaders. They didn’t even make it inside before a few sharp slashes turned them away, severing their courage in half. Good news: They survived despite losing consciousness from blood loss.

2. Fighting off an insane attacker, with a sword. For those of you who are in doubt, skilled swordsman vs drug-crazed home invader (1 – 0).

There are many incredible stories of people displaying shows of courage. Unfortunately, not all end well, but all the sword defense stories I read were amazingly positive (for the victims of the assault).

Are sword-fighting and fencing useful for self-defense? Yes. Fencing beats knife fighting because a sword has greater reach compared to a knife. But it is less useful! Carrying a sword (even sheathed) is illegal, and you won’t find many at your disposal. But knives are wide-spread and fighting with knives is basic tactical training that most military personnel goes through.

Are katanas good for home defense? Yes, but they are not the best! Kendo fighters draw katanas with a specific technique, to increase their slashing ability. That is nearly impossible in a confined, narrow corridor or small apartment. But you can use them for stabbing and keeping the invaders at distance. Learn some basic technique!

How good is a rapier for self-defense? Rapiers are the longest thinnest swords, used in fencing. They can’t cut but you will stab, pierce and wounds an unarmed opponent. Even an invader with a melee weapon will face a difficult challenge. You will effectively keep him at distance. But if two attackers corner you, then you’ll wound one of them at least. Too long for indoor use, especially in narrow spaces.

Machete Basics: Can Carrying a Machete in Public Get You in Trouble?