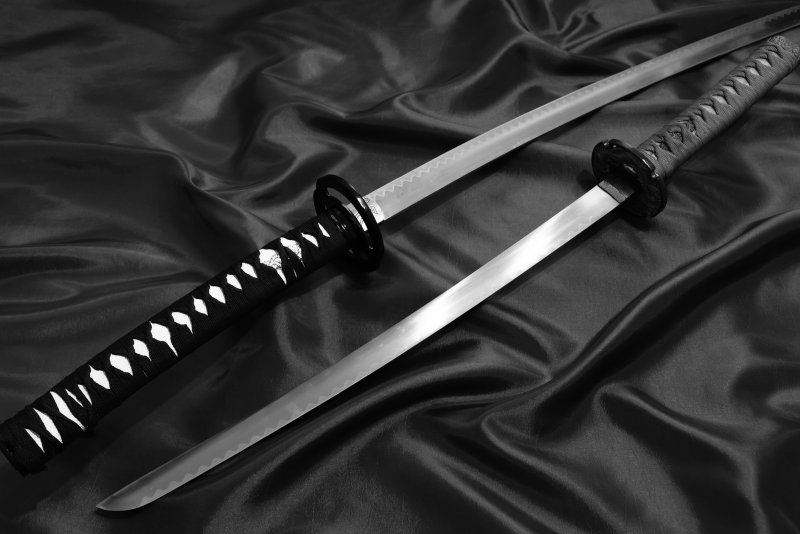 Throughout the history of Japan, there have been some unique sword designs and models. Some share similarities yet are distinctly different; while others have different names and yet are virtually the same. There are endless forum debates about the differences between the odachi vs nodachi vs katana. This can make telling the swords, and their respective names and characteristics apart, tricky.

If you are confused, you are certainly not alone. Fortunately, there are some simple yet effective ways to identify Japanese swords. The odachi vs nodachi vs katana is an ongoing dispute among both amateurs and historians. These are few of the swords that are mixed up frequently. This is understandable, if you ask me, especially with regards to the odachi and nodachi.  You will see why.

There are some notable differences between each of the Japanese sword types. To understand them, we will start off with the most renowned blade: the katana.

This sword has an upward-facing blade so that the wielder can draw and strike swiftly, almost simultaneously. Thanks to this, the katana is lightning-quick. Scarcely is the blade drawn when the opponent must block the strike or die.

One of the most distinct characteristics of the katana is a blade with a curve. As the katana was made for slicing, this only makes sense. The curve streamlines the blade’s edge, allowing its wielder to draw, swing and strike even more quickly.

An ancient sword, the katana originated in the Muromachi period of 1392-1573. The katana came into being as war conditions changed, and the demand arose for a smaller blade; one which could be used indoors, for one.

Katanas have a guard that is circular or square, and the aforementioned upward-facing blade, which the katana was the first sword to possess.  The latter increased the speed of the warriors’ attacks, which gave them an upper hand against those wielding other, slower weapons.

The uchigatana is an interesting sword; it looks like a katana, with a single-edged, curved blade, yet it is not a katana.

The primary difference between the two swords is the quality of craftsmanship. A katana was generally considered to be of a much higher quality. The sword was made of premium materials and could take a long time to complete. The uchigatana, comparatively, took a much shorter time and did not require superior jewel steel and blacksmithing. So, we have a first glance in the katana vs uchigatana comparison. The key difference is quality.

The materials were of lower quality, to the extent where the swords were actually considered disposable. The uchigatana would oftentimes be replaced after only one battle – because it wore out or broke off. To me, it is surprising that they would bother to make such poor swords in the first place. But I guess, more low tiers are better than a few premium blades when the enemy is at your doorstep.

However, considering the high quality and cost of the katana, it makes sense that less wealthy folk wanted their own, cheaper version of the katana: the uchigatana. Whether you are of high-born status or a meager peasant, nowadays you can buy exceptional mono-steel katanas.

I wrote an article about the durability and sharpness issues in modern samurai blades. If you prefer toughness above anything else, then spring and tool steel katanas are best.

In the historical context, before the katana or the uchigatana, there was the tachi. The sword is curved similarly to the katana, and it can be hard to tell the two apart at first glance.

The primary difference between katana vs tachi is how they are handled; while the first one is held blade-up, the second one is held blade-down. Additionally, the tachi features a deeper curve next to the katana.

Odachi vs Nodachi vs Katana

Let’s move on to the nodachi. This immensely powerful sword is said to be a favored weapon of the Gods themselves. This ancient weapon dates back to the 15th century.

The nodachi is 3 or more shaku in size (1 shaku being roughly 30 cm). It is considerably larger than its counterparts. The katana measures 2 shaku; a longsword is 2 shaku or more. The nodachi is the Japanese equivalent of a greatsword and its length is 3 shaku or more.

Since the nodachi is so long, it was used as a field sword only. The sizable weapon could take down cavalrymen and their mounts alike.

The length of the odachi vs nodachi vs katana means that the longest, the odachi and nodachi, are quite heavy. To wield this blade required much training to work up the muscles for the task. So long and hefty was the sword that it was difficult to draw.

To remedy this, some warriors had a follower that would help them draw the sword. I imagine that many strengthened themselves to the extent where they could draw their own swords, for both the sake of their pride and practicality.

In battle, the nodachi was truly devastating. The sword could shatter blade and bone alike. This made blocking a nodachi with a lesser sword a foolhardy move. The only chance those with smaller swords had was to dodge and wait for an opening immediately after a nodachi strike. The slow recovery time of the more cumbersome weapon would leave a window for attack. The other option would be to tire out the wielder of the weighty nodachi.

The nodachi is a high-quality weapon; it called for the most expert craftsmen, and, like the katana, it took a while to make.

Another famous Japanese sword is the ninjato. There is actually no historical evidence of this sword, though it is popular in modern movies and the like.  According to legend, the ninjato was the ancient Ninjas’ blade of choice.

The sheath of the ninjato is said to be longer than the actual blade. This was supposed to serve a couple of purposes: first, the storage of chemicals, poisons, and so on; and second, for the element of surprise, as their opponent expected a longer weapon and therefore a slower draw.

The ninjato is a single-edge short-sword, meaning it is generally below 2 shaku (katana), but larger than 1 shaku or less (a knife). It is of smaller length compared to katana or a longsword.

Despite the lack of evidence for the ninjato, there are many replicas today. Some believe that these ninjato swords draw inspiration from the chokuto or the wakizashi.

What Do the Names Stand For Katana, Odachi, Nodachi?

The odachi is similar to the nodachi in all but one way, which is explained as follows. When it comes to the odachi vs nodachi vs katana, this contrastive comparison is, in fact, referring to only two types of swords; the katana is its own weapon, and the nodachi and the odachi are in fact completely the same physically.

Here is a complete explanatory guide about the main differences in meaning between these. This guy actually studied Japanese history, and I think you’ll find him fascinating:

The only difference between the two is their names. Nodachi means field-sword, whereas odachi means greatsword, alternately. The same object, referred to using different words, probably depending on the context.

Katana means sword, simply. It is what the word used by the Japanese to refer to any standard sword. But when Japanese blades became popular in the West, we imported their vocabulary, sort of forgetting the initial meanings.

Are Odachi and Nodachi the Same Blade?

Yes. As touched on above, the odachi vs nodachi vs katana refers to only two types of swords. The odachi and the nodachi are in fact the same thing, only named differently (nodachi meaning field-sword, odachi meaning greatsword).  The names odachi and nodachi have been used interchangeably throughout history.

Which Sword Is Best In a Duel?

When it comes down to pick a blade in a life-or-death situation, which one is the best in a duel? Assuming that both sword fighters are equally matched in their expertise, a fight between a nodachi and a katana can go a few different ways.

Those who wield the nodachi must train to be suitably strong, of course. Once they can draw and wield the weapon properly (these days, followers are not really an option!), they can be quite formidable with the weapon. This guy is pretty strong, but just watch how hard it is even for him to wield this monster:

The strike of a nodachi is brutal and destructive. The nodachi appears to be more of an offensive choice, rather than defensive. The sword utilizes brute force. This reminds me of using greatswords in PC and console games: their strike is unmatched in power, and you can easily stagger an enemy. But you can be easily caught off-guard.

There is, however, a trade-off. The recovery time of a greatsword is slow. This means that, after a particularly powerful strike, it will take you a moment to draw your sword back in and prepare for another attack, leaving you vulnerable. During this time, an enemy with a smaller, fleeter blade may slip in and score a strike themselves. It doesn’t have to be a deadly blow, just a light graze that disables your movement and agility.

Which brings us once more to the katana. Thanks to its lesser size and lighter structure, the katana is ideal for penetrating the defenses of the nodachi / odachi wielder. The upwards-facing blade makes for a fast draw, and the smooth, aerodynamic curve of the edge makes for an even faster attack. The slicing movements of a katana are ideal for sweeping in quickly and then making a prompt retreat.

The downsides for the katana when it comes to the odachi vs nodachi vs katana is weakness and lower durability. In battles, when the katana was raised to block a nodachi, it could break because of the heavy blow. They are not effective at parrying. In a modern-day, casual duel, this means that the nodachi would likely knock a katana from the wielder’s hands.  To avoid this, those who opt for a katana must be fleet of foot, and very good at dodging attacks, when facing someone with a nodachi, and keep a safe distance.

If you are wondering what blade you should choose for yourself for practice, think about your talents. Are you more of an aggressor, with a preference for the brute force of a heavy sword as well as long reach (the nodachi)? Or are you more of a defensive type, skilled in agility and fast swipes (the katana)? You can decide for yourself.

Either blade will require plenty of practice, of course, no matter your natural gifts. Discipline is key to true mastery.

As you can see, Japan has some very cool swords, developed for different situations that come out of the historical context. The arms race is truly the longest competition, still running since the dawn of time.

The odachi vs nodachi vs katana is an endless debate. But there are few of the many greatswords and longswords renowned for their deadliness in battle. When it comes to raw power, the odachi and nodachi are doubtlessly the better blades. The katana, on the other hand, was built for superior speed and flexibility.

The best weapon really depends on the skill of the wielder. It’s a David versus Goliath situation! Make your choice carefully, train frequently, and you can face your opponent with confidence. Or better yet, don’t… We are in the 21st century after all!