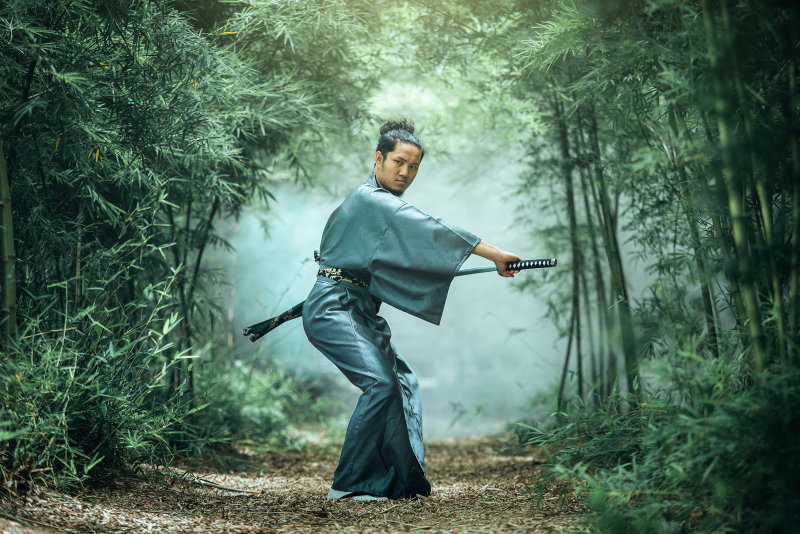 The world has long been fascinated by legendary swords, from anime to popular movies and video games. A blade can be a family heirloom, passed down from generation to generation. We have put together a list of our 5 favorite legendary katana, including mythological swords, famous fictional swords, and legendary Japanese blades that have reached fantastical status.

If you love these magnificent weapons or enjoy a good story, this list will give you a brief history of those legendary katana and the drama surrounding them.

Are eager for facts rather than fiction? Then check out our beginner’s katana guide to learn more about qualifying and buying Japanese blades. The article contains a thoroughly researched list of some of the best katanas currently on the market.

The story of the cursed sword is not uncommon. Weapons are designed to bring death and destruction, so they hold a particularly dark image in the collective conscious. And from that dark place, many stories and beliefs emerge. Because of their destructive, crippling effect, katanas often appear in martial arts and action movies – to incite and call upon that dark place of inner shadows, from our deepest consciousness. Here are just a few examples…

Beatrix Kiddo, the angry Bride with the sword, from the TV action thriller Kill Bill. She receives a real samurai sword personally forged by swordmaster Hanzo Hatori, for the purpose of killing her killer (Bill). At first, he refused to make her a weapon, since had sworn a blood oath never to forge another sword. She explains that the “vermin” she means to kill is none other than his former student, Bill. Therefore he is obligated to forge her a katana, considering he had a crucial role in elevating and training the evil man she is after.

It takes him a month to complete the sword, giving her time to practice and hone her skills as she waits. He holds a ceremony for her to receive the weapon, during which he tells her the only reason he broke his oath is so that she can use the sword to kill Bill. Hanzo also says that this weapon is the finest katana he has ever made. In the movie, it becomes the greatest samurai blade ever created.

The katana follows the same 3-themed color pallet as Beatrix’s famous black, yellow, and white tracksuit. The sword is described as long and gracious, like its owner. Also, it has a black scabbard, which speaks of her desire for death and revenge. As a symbol of bravery, there is a Japanese lion etched into the blade, just above the handguard.

Even though the katana was made so that Beatrix can kill the unfortunate names on Death List Five (her betrayers), it actual slew only one of them, O-Ren Ishii. In the end, it only had a minor role in killing Bill, since she only uses it to defend against his sword. Even so, this movie was a great marketing tool for katana makers around the world, making their products even more popular. We had to put this blade at #5 on our list.

Another famous fictional sword comes from SNK’s Samurai Shodown. Samurai Shodown is one of the most influential fighting game series, with incredible storylines and detailed backstories. It has inspired movies, manga, and video games for decades. While many of the katana from the series could have made this list, Baio-Doku is by far our favorite.

Baio Doku is the prized katana of Kibagami Genjuro. He debuted in Samurai Shodown II, replacing Ukyo Tachibana as the official rival of Haohmaru. In the story, he is another student under Nicotine Caffeine, along with Haohmaru, until he began killing his opponents during a test. After that he retained a grudge against his teacher and Haohmaru, swearing to kill them one day.

As a hitokiri or mercenary, Genjuro claims to have killed thousands, along with his own mother. He was hired by Mizuki Rashoujin under the condition that she would eventually help him kill his rival. In the end, he was not able to defeat his former friend and was implied as dying from a wound after being stabbed in the back.

He has a very rough and wild fighting style with bursts of brutality, often using his sword to throw energy attacks. He can fire energy projectiles from Baio Doku, as well as ki energy attacks. His sword, also known as Poison of the Plum Nightingale, is a famous anime sword in the Samurai Shodown universe. As his weapon of choice, it amplifies his power as a swordsman and is famed for its role in helping him kill thousands of victims indiscriminately.

This sword is drawn as a very long blade, with a subtle curve. It has a large bronze guard and a yellow and black wrapped handle. Sometimes it is illustrated with a blue or plum colored shine on the blade, to call back to its name. As a symbol of raw strength, ability, and determination, this katana easily made it to our top 5 favorites list.

Another famous fictional sword is the cursed katana named Hina from the popular manga series Love Hina. It has a few other names, primarily The Ominous Blade, the Cursed Blade, the Youtou Hinata, or the Hina Blade. This katana is possessed by a spirit of an enemy of the Shinmei-Ryu swordsmen. This enemy once fought those samurais nearly to extinction.

If channeled properly, it can provide great strength and power to its wielder, but with the price of their soul. Hina is able to possess and drain the power of anyone not capable of channeling it properly. It took the entire Shinmei-Ryu school to defeat its wielder and seal it away after it turned Kyoto into a fire-storm.

It became a family heirloom of the Urashima Family, finally being given to Motoko Aoyama to replace her previous sword. She sensed it was evil and refused to use it. It possessed Naru instead, during a battle against Tsuruko Aoyama, Motoko’s sister. Its possessive powers were sealed away before much damage was done, allowing Motoko to wield it safely. Others were still able to be taken over by the blade even after it was sealed.

This katana is typically drawn with a is described scabbard and has an oval guard. The handle is wrapped in black leather. Since this manga was illustrated almost entirely in black and white, very little else can be determined about its physical description. This certainly does not take away from this sword’s power as one of the most famous fictional swords.

#2. Kusanagi-no-Tsurugi or the
“Grass Cutting Sword”

As important as the sword Excalibur is in Britain, this legendary sword is essential to Japan’s history. It is one of a set of three katana, known as the Imperial Regalia of Japan. It is a symbol of the ancient imperial family’s right to rule as descendants of the sun goddess.

Found in the body of a giant eight-headed serpent that was killed by the god of storm and seas, the Kusanagi-no-Tsurugi was once called Ama-no-Murakumo-no-Tsurugi, or “Sword of the Gathering Clouds of Heaven”.

The more popular name was adopted later after its most famous legendary tale. During the reign of the 12th Emperor, the sword was given to Yamato Takeru. He was led to open grassland and was trapped there by an enemy warlord. This warlord planned to burn Yamato to his death by setting fire to the grass around him.

Desperate, Yamato began cutting down all the grass around him with his katana. In his efforts, he found out he could control the wind with his sword. He defeated his enemies by sending the fire back to them, and named his katana the “Grass Cutting Sword”. Later in the story, Yamato died battling a monster, after disregarding his wife’s advice to always have Kusanagi-no-Tsurugi with him.

In The Tales of the Heike, the katana is said to have been lost at sea after the Battle of Dan-no-Ura. These oral stories describe the naval battle as the defeat of the Heike clan and the child Emperor Antoku by the hands of one of the most famous samurai fighters in Japan’s history, Minamoto no Yoshitsune. He went on to stop some of the Heike clan from drowning themselves with the three Imperial Regalia swords, but only managed to recover two of the weapons.

The oral stories also say it is housed in the Atsuta shrine in Nagano Prefecture, but it has not been on public display or seen, in centuries. It was used in some imperial coronation ceremonies, it is always covered in cloth. Sadly, the most legendary of them all the Imperial Regalia, Kusanagi might be lost forever. There is no question why this mythological sword is so close to the top of this list.

The most legendary Japanese sword is a very real weapon forged in the Edo period by a master swordsmith named Masamune. It is said to be the best Japanese sword ever made and was passed from one shogun to another through the centuries. In 1939 it was officially named a Japanese National Treasure.

The sword itself is renown for its incredible beauty since it was made with Masamune’s signature pearlite method. This is done by embedding the steel with crystals, giving it a unique sparkle.

The most famous story about this mythological sword is the story of its origin. Masamune defeated his rival, Muramasa, in a battle to determine who made the best sword. Honjo Masamune was able to cut through passing leaves when dipped in a river, without harming any wildlife. A monk decided that this was better than the rival’s sword, which destroyed anything in its path, and named this katana benevolent.

Obviously part of its name stems from its creator, but the other half came from a famous samurai who owned it, HonjoShigenaga. During the 1500s, he was an of Uesugi Kenshin. He killed its previous owner during a battle, even after the sword cleaved his helmet apart. The sword was his hard-won spoil of war. He kept the sword until around 1592-1595 when he was sent to Fushimi Castle.

Shigenaga sold the sword to Toyotomi Hidetsugufor about 13 Mai, which is large gold coins. Later the sword was revalued at1,000 Mai. After being sold again and again to various samurai and families, it landed in the Kii branch of the Tokugawa family. It remained with their family until they surrendered the weapon at the end of the second World War.

The most unbelievable part of this famous Japanese swords storied past it how it went missing. After WWII, all Japanese weapons had to be surrendered to the Allies, and some were taken as spoils of war. Honjo Masamune was one of those willingly surrendered by the Tokugawa family, who gave it to a mysterious Allied sergeant, “Coldy Bilmore”.

There is no record of this sergeant, and the sword has since been missing. Rumors say it is somewhere in the United States of America. Hopefully one day it will be found, and this famous Japanese sword will be on public display. Even though it could be gone forever, this sword is by far our favorite katana, especially since it reached its legendary status by proving itself through history.

Of course, this list is in no way exhaustive, as there are hundreds of famous anime swords, real legendary Japanese swords, and mythological katana out there. These made it to our favorites list because of their intriguing stories, fantastical status, and their popularity in modern culture. We hope you enjoyed learning little more about these incredible weapons, and love them as much as we do!

Many thanks to the artists and photographs for sharing their work:

Best Samurai Sword Ever Made