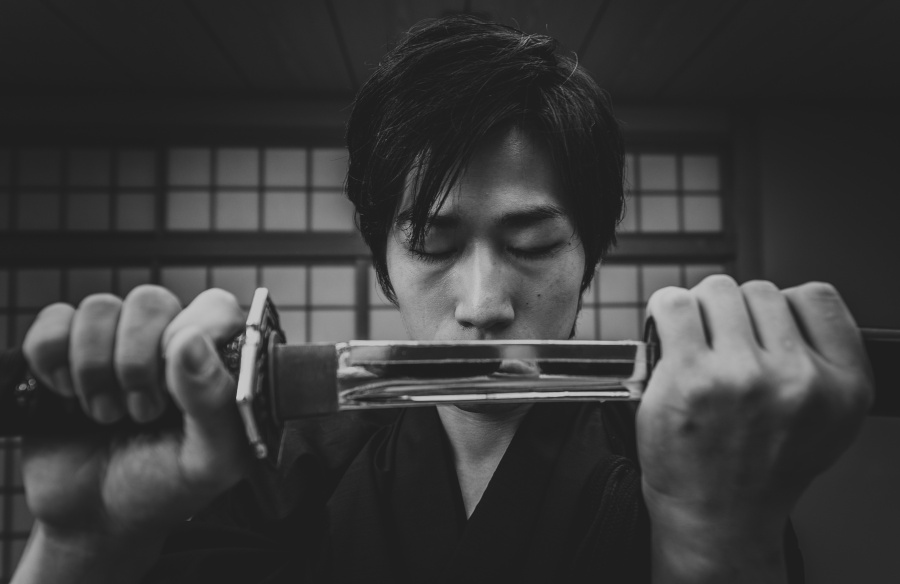 The katana has been a symbol of Japanese traditional culture for hundreds of years. If there is one civilization that has perfected the art of sword-making, then that would most certainly be the Japanese. That is precisely why I wanted to make a top 10 Japanese swordsmiths list. While it is currently incomplete – I plan on adding more stories and personalities here!

While I never personally contracted a professional blade-smith, I owned a few katanas in my time. So if you are in a hurry for a modern sword, check out my article about the pros and cons of modern katanas – where I present a beginner’s guide!

Let’s shift our attention to the history of the katana. Why do I believe that a katana is a central element in Japanese history? Well, consider this…

No other craftsmen have dedicated more time, energy, and attention to the elemental mastery of forging swords, than the Japanese swordsmiths of the past. It is a form of art that remains vibrant and alive to this day. Thankfully!

I once read something very interesting: “If you want to know what someone truly values more than anything else, watch them carefully. Pay attention and notice what they spend time and energy on.”

If this presumption stands true, then the katana was certainly very important in Japanese culture. And it still is!

In medieval Japan, the sword was a sacred and noble weapon, owned only by the elite military commanders, the samurai. Loyalty and honor were the highest virtues of this class of warriors. They lived under a strict code to obey those principles. They lived and died by them!  At least most samurai did. Don’t get me wrong, they weren’t all that great; I know many stories of cruelty about some of the horrifying acts of the Samurai!

Each samurai had his own set of swords and weapons. We usually associate only the katana with the image of a Samurai, but that is only because of historically inaccurate pop-culture and movies.

They were actually elite fighters, schooled in martial arts, arms mastery, and military strategy. The Samurai were extremely skilled in all types of combat situations: close-quarter engagement with knives, spear fighting, horse-back riding, and precision archery.

The katana is only one of the multiple blades in their possession, specifically designed for battlefield warfare. They had shorter swords and knives, as well, similar in design with the long katana. I am referring to the wakizashi (this was a short sword) and the tanto (long knife). Katanas weren’t even the longest blades – don’t forget the enormous field-swords (odachi / nodachi).

Since we are talking about weapons, let’s move on and compile a list of Japanese swordsmiths. The best of their class, the ones whom history did not forget. And them I will even list some of the amazing bladesmiths that still live and work in Japan, making exemplary blades.

We know that this tradition goes back 1300 years (since about 700 A.D). The earliest katana designs were heavily influenced by the Chinese swords. They were straight, double-edged, long-blades, nothing special or distinctive about them.

As Japanese identity began to take shape, the feudal class system was formed. Gradually they moved away from the Chinese cultural influence. They developed their own style. This is evident in the unique geometric shape of the later Japanese blades models. That is how the curved katana was first designed. There is an amazing legend about that; Read about Amakuni, below.

I want to go through the most renown Japanese blade-smiths, both in ancient history and in modern times. Let’s explore some of the legends and myths surrounding this art form.

Later, I will provide some additional information and a comprehensive listing of modern sword-smiths which still work out of Japan and commission contracts with collectors, in case you decide to purchase a real samurai sword. Scroll to down to see more on that topic. But first, here are some legendary names that you might have heard of.

Masamune Goro (1264 – 1343) is recognized as the greatest Japanese swordsmith who ever lived. This list cannot start without mentioning him first! He has reached almost legendary status. His blades are remarkable artifacts of superior quality and beauty, outclassing all other models from the same historical period.

There is a catalog of “most excellent swords and blade collections“, and it lists Masamune crafting somewhere between 41 and 61 blades during his lifetime. So, you know there is scarcity there! What is rare is also precious.

According to an ancient legend, Masamune was challenged by his pupil one day: Who could make the better blade? They went to work, day and night. Weeks passed, months passed, and the blades began to take shape.

Eventually, they finished their work. Exhausted, they sat down together by a river, near a monk who was drinking his tea. It seemed like the perfect opportunity to test which is the better katana.

They would suspend the sword from a branch, so that the blade would be halfway into the water, with the edge facing the current. The sword that would cut more things flowing down its path, would be the champion.

The pupil’s blade was fierce. It could each slice in half everything in its path: leaves, branches, logs. Even the fish. The water was screaming as it was split along its sides. The wind wailed and whistled as it blew across the edge. The master proudly gazed upon his student and praised his talent: “You created a blade like no other”.

Then it was time to test Masamune’s sword. His blade could slice through leaves, branches, and logs just the same. But the fishes stopped like entranced, in front of it. Insects could safely rest on its edge. And the water, the air, the wind stood silent in its presence. The pupil smirked arrogantly towards his master.

Sure of his win, the young man asked the monk to be the judge for the better sword. Closely following what happened, the monk replied calmly:

“Yours is a bloodthirsty blade, it kills and cuts through anything that gets in its way. It does not discriminate between innocent and guilty. It is a sword that brings war, draws blood, and casts death. The second blade is much finer and only cuts with purpose, sparing the life of that which is innocent. It doesn’t kill that which comes along harmlessly in its path. That is a sword of peace.”

Amakuni Yasutsuna was the first Japanese swordsmith. He was the original designer of the single-edge, curved katana that we all know and love. The remaining historical records show that sometime in the early 8th century, Amakuni was employed by the Emperor of Japan to make new weapons for his soldiers. He was the head of a big blacksmith’s group, working for the Imperial court.

For someone who has contributed and enriched Japanese culture so much, we know very little about him, mostly folk tales and legends. According to an old story, one-day, Amakuni and his son, Amakura were sitting outside their smith-shop.

The city gates opened, and a long line of defeated soldiers came pouring in, wounded and with their swords broken. The Emperor was irritated; He didn’t even acknowledge Amakuni’s presence.

Feeling that he has disappointed the Emperor with low-quality blades, he decides to make amends. The ambitious blade-smith gathered all the shattered, broken swords from the wounded soldiers.

Day and night, he studied them carefully for weeks, taking note of every tiny imperfection, every little flaw, crack, and scratch. Amakuni prayed to the gods for the knowledge to forge the flawless sword.

One day very soon, he wakes up from a dream. The perfect design has been revealed to him. He and his son lock themselves in the forge for weeks on end. And from the best iron, under the hottest flame, they begin forging the perfect katana.

They finally emerge, tired and weary, after months of hard labor, The freshly-polished, curved sword brightly shines in the daylight sun, for the first time in history.

All the other blacksmiths laugh and ridicule their insane creation. “How can a bent blade be of any utility in battle?” But Amakuni and his son summon their group of sword-smiths for a final job: to make hundreds of curved katanas in the months to come, to be used by the brave soldiers, in the name of the Emperor. The next battle has been won, and no blade was broken.

Amakuni succeeded in forging the perfect blade and has received the respect he craved for. The Emperor and his troops praised him for the victory. It is also said that the new blade ripped open a new era of bloodshed and conquest. Although Amakuni is long gone, his creation lives on and it will always remain a vital symbol of Japanese history and culture.

Muramasa Sengo (early 1500) is yet another legendary and famous blade-smith who forged swords for the Imperial court during the Muromachi period. Initially, his blades were held in very high regard at the highest political and social levels. Shogun Tokugawa Ieyasu himself favored Muramasa’s work. But there is a dark legend surrounding him.

In pop-culture (movies and video games), there is always a cursed sword. The legend of the demonic blade originated from Muramasa’s relationship with the shogunate and its elite samurai class.

His swords were favored by the elites, because of their exemplary quality and sharpness. But whenever a misfortune happened in the Tokugawa clan, it was always somehow related to a Muramasa blade.

And the shogun’s son committed ritual suicide (seppuku) with a blade forged by Muramasa. Despite all that, he remained the shogun’s favorite sword-smith.

However, in the centuries to follow, there was massive unrest between the warring factions in the country. Civil war and political rivalry, not to mention social upheaval against the ruling class.

For some reason, the movement became associated with Muramasa’s swords, probably because of their penchant to kill members of the royal family.

The Muramasa blades gained a dark, almost demonic reputation as if they were magical weapons, meant to take down the shogun and destroy the Imperial ancestry. They became known as the yōtō, the “cursed swords”. Muramasa’s katanas became the symbol of the anti-Tokugawa movement.

Despite that, the Ieyasu family still kept those swords until 2013, when they donated their century-old family heirlooms to a Japanese museum.

Hikoshirō Sagami Kuni Sadamune (1298 – 1349) was a bladesmith of the Sōshū school. His crafts are regarded as some of the best Japanese swords and blades ever forged. In fact, he rivals the work of Masamune himself.

The chip doesn’t fall far from the tree I guess, because Sadamune was the son either by blood or adoption of Masamune. As I wrote previously, Masamune is acclaimed to be the most prominent and skilled swordsmith of all time.

Sadamune was the brightest student of his master. After finishing his training, he received the honorary name particle “mune” from Masamune.

All of Sadamune’s blades are of exceptional quality, true works of art. Perhaps his most renown creation is the “Rope cutter”, a tanto belonging to General Toyotomi Hideyoshi.

This Japanese swordsmith captured our attention and remained in history not only because of his work. But also due to his influence on all the subsequent generations of blade-smiths.

Creating a katana is an art-form and there have been many great Japanese artists throughout the ages. I hope this article introduced you to a tiny portion of their story. As I find more interesting fun facts and stories, I will add them in this post, so stay tuned.

Many thanks to the artists and photographs for sharing their work:

Where To Buy a Real Katana?