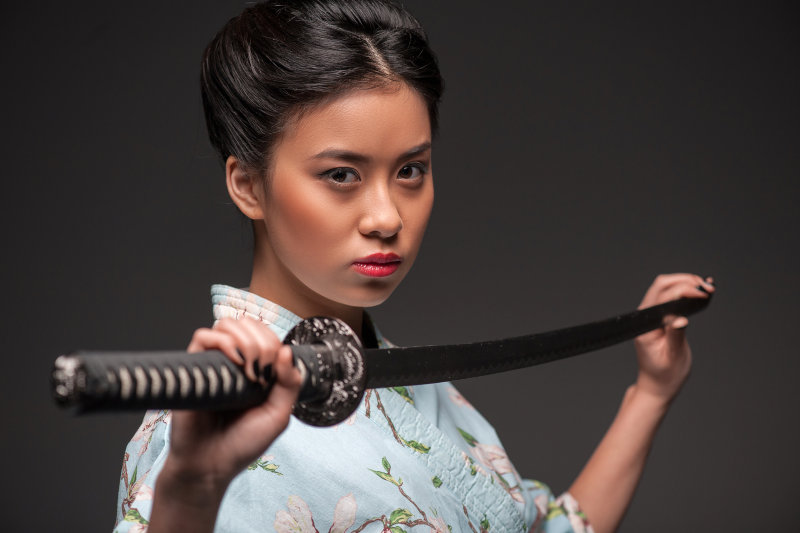 The katana is a Japanese long sword that has a curved, single-edged blade that was used by samurai warriors from 1400 until 1876. Yet, it remains one of the finest swords in the world. Have you ever wondered why are katanas curved?

Why were they preferred by the samurai over other swords? If these questions have rattled your mind, keep reading because I have an answer.

The first thing we all notice about samurai swords is the curvature. That is called sori in Japanese. Katana curve measurements depend on the blade style, however, the average curve should be approximately 1.5 cm.

Most of the Japanese records mention that katana was the most aesthetic sword created by Japanese blade-smiths as it had a curved blade. However, the curved blade wasn’t meant to be aesthetic.

It helped samurai warriors to unsheathe their swords faster and keep their balance while preparing for an attack or while defending themselves. Believe it or not, samurai warriors were studying ‘the art of drawing the sword’ as it was an important offensive and defensive technique that can be only mastered with a katana.

Another reason why are katanas curved is to inflict grievous and precise damage. It means that the curved blade allows a natural slicing motion while drawing it. Katana made wounds were large and most of the time deadly.

And if I may talk honestly, katanas were designed to slash people in one movement. Most samurai duels lasted only 3 or 4 swipes with the blade – no more than a few seconds. I know that modern cinema likes to dramatically exaggerate fighting scenes, to build suspense – but that style of combat is far from reality.

The final reason is the curved blade allowed samurai warriors to attack an opponent in a single movement. Technically speaking, the katana’s curved blade came in contact with a target faster than the straight sword. It has a lower center of mass, closer to the handle. This was very important in a close-combat environment.

I hope that now you have an idea about the main purposes of the curved blade. I will try to answer other important questions about katanas.

How Sharp Is a Katana?

Myths and legends surrounding the Japanese sword gave rise to rich stories. For example, there was a story about how to test the sharpness of a blade by allowing a silk scarf to fall on its edge.

The katana was sharp enough if it could slice the falling scarf. Well, that is most likely just a legend. However, katanas that were used by samurai warriors were just as sharp as razor blades.

I hardly believe it could cut through a metal plate, but it was sharp enough to cut through hard leather armor. No need to wonder why samurai warriors had to sharpen their swords.

Usually, after forging the katana, blade-smiths would pass it to a person whose job was to sharpen it. The sharpening process would take from several weeks to a month (or more). It was a very important step in the process.

How Are Katanas Made?

Watch the video for a complete walk-through of how katanas are made. Now you know why are katanas curved, how sharp they are. This documentary is one of my favorites. If you haven’t watched the video, let’s look at how the Japanese blacksmiths would forge their swords.

Samurai swords are made from the finest steel called tamahagane that can be translated as “jewel steel”. Blade-smiths use two types of tamahagane steels:

While forging the blade, it is very important to remove impurities from the initial ore. This process takes several days. There is a specific smelting technique that allowed the blacksmiths to do purify the steel.

At this point, the master smith forges several pieces (sheets / rods, call them what you want) of tamahagane. Some are low carbon (soft but tough), others are high carbon (hard but fragile). Medium carbon is a good compromise between the two options. Then we have the next step (Check out the video I posted above).

The second most important stage is fusing and folding the steel pieces. Blade-smiths combine two or more tamahagane into one. To do this, they heat the steels red-hot, and then they press them together. A bit of hammering to finish the job, and finally they dip the combined piece into cold water. Rinse and repeat the entire process.

The soft, low carbon tamahagane serves as the katana’s core (spine). We want a durable spine so that it doesn’t break under stress. The high carbon steel goes on the outer layer. It becomes an exterior shell, especially around the edge. So that way our sword stays sharp for a long time. However, the work isn’t done yet.

Certain parts of the katana need to be harder than others. The edge needs to be hard, while the spine should be softer.

How do we achieve this? The answer is differential hardening. Here is what Wikipedia has to say about that: “Differential tempering begins by taking steel that has been uniformly quenched and hardened, and then heating it in localized areas to reduce the hardness.” (Wikipedia, reference)

Blade-smiths begin by clay-coating the edge. The entire blade (except for the spine) is covered with thick clay. That layer will insulate the edge and limit the amount of heat it receives. So, when you put it into the fire, the spine is over-heated, while the edge is under-heated. As a result, the spine will become softer.

By giving extra-heat to the spine, the spine will dilate accordingly. The higher the temperature, the greater the bending. That’s why katanas are curved: a side-effect of differential hardening, but a desired side-effect which serves a functional purpose.

So, to harden the spine you place the blade under a hot fire, just below 815 degrees C (1500 F) temperature. If the temperature is any higher, the sword might crack. This part is a bit tricky but necessary.

Once the steel blade is fully enhanced, the bladesmith passes the sword to someone who can polish and sharpen it. This process is the longest and, as I mentioned previously, it may take several weeks or months to do it properly.

Another craftsman makes the sheath and handle, the fittings that go along.

Finally, artisans decorate the handle with various exotic symbols, designs, precious stones or even gold. After decoration, the bladesmith inspects the katana and delivers it to the owner.

The most amazing thing is that the creation of one katana takes nearly six months and requires about 15 skilled workers. I bet you are surprised as well.

Since we went through the process of making the sword, let’s look at something simpler such as its measurements. As you might have already heard, katana dimensions may vary depending on the height of its wielder.

Average katana blades measure between 60-76 centimeters (27 – 30 inches). This length is just for the sharp segment of the sword, excluding the handle. The total length is about 100 cm (about 40 inches).

As a sword enthusiast, it is quite useful to know that katana length is traditionally measured by shaku. This was the old way of figuring out how long should the sword be. One shaku is around 30.3 centimeters. The standard size was 2-3 shaku.

There were no exact size specifications regarding Samurai swords as every blade was tailored for the person wielding it. Nowadays, swords come in different sizes and lengths, and if you plan to buy one, check out this katana length guide.

Sometimes people fail to differentiate between a samurai sword and a katana. Even I use these terms interchangeably.

The samurai used many weapons and they owned various types of blades: tachi, wakizashi, tanto, iaito, katana, uchigata. Each of these items is technically a Samurai sword. But since we are on the topic of katanas, you’ll understand that’s the one I am referring to by “samurai blade”.

“Katana” was the term that stuck in the minds of ignorant Westerners, and that is how it became so popular. Although both terms can be used equally, katana is more specific and well-known.

To some degree, all Japanese swords share the same design, functionality, and features. “Katana” is what they called their long blades, measuring 2 shaku units (or more).

Don’t forget, the Samurai were expert warrior, skilled in all types of weapons. The katana was just one of the tools in their pockets. So, it is not the only Samurai sword, although that is what we typically call it.

To sum up, the katana is an extraordinary sword that has a rich history. It is a weapon and a work of art. Many stories and legends were conceived about it, along the hundreds of years.

It hides many secrets even though it is widely known in the modern world. There are so many things to learn about its history, and I really hope that this post helped you with an answer to the most common questions.